A consultation document sent to industry by Defra, the agriculture ministry, on Tuesday night warned that “the potential for further disruption remains high” and proposed a new expedited return scheme for supermarket hauliers using the short straits crossing.

“Given the potential for border delays to impact supply chains over the next few weeks, we are proposing an emergency contingency measure . . . to expedite the return of empty food lorries from the UK to the EU where they can be restocked with supplies,” said the 18-page consultation marked “official sensitive” and seen by the Financial Times.

The scheme, if enacted, envisages allowing up to 300 trucks a day to skip queues outside the Channel ports of Dover and Folkestone and would be open only to the largest supermarkets and their subcontractors.

It is part of broader government plans to prepare for post-Brexit border disruption, which has so far not materialised.

Although pre-Christmas stockpiling has meant that flows across the short straits have only been half the average, traffic levels are expected to return to normal soon.

French customs announced this week that they anticipated full flows “within about 10 days” and warned they would be “especially vigilant” in coming weeks on enforcing border formalities, further raising the risk of delays to supply chains, particularly food products that attract the most paperwork.

The consultation document warns that the Dover-Calais route is “critical” to UK food supply, with approximately 10 per cent of food consumed in the UK coming across the Channel. In winter months about 75 per cent of fresh fruit and vegetables comes via this route, according to the British Retail Consortium, a trade body.

It notes that last December, at the height of the congestion caused by new Covid-19 controls, the time to make a round-trip to the EU doubled from four to eight days and about 25 per cent of supermarket deliveries were not completed for several days, but consumers felt little impact “as supermarkets had overstocked prior to the Christmas period”.

Under the proposal, lorries that could demonstrate they were working for a big supermarket or supplier and were planning to return to the UK within seven days would be granted a priority permit to bypass lorries stacked on the M20 under Operation Brock.

The new plan would be triggered only when waiting times outside Dover had reached eight hours or more and the loads delivered to UK supermarkets had fallen below 75 per cent of expectations for two consecutive days. 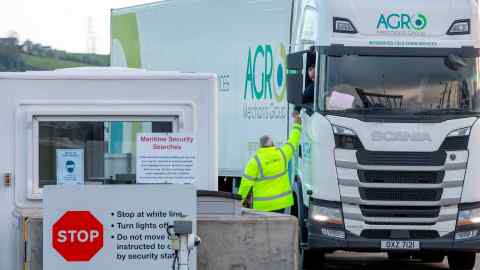 Rod McKenzie, director of policy at the Road Haulage Association, said the scheme was to be welcomed in principle, but much would depend on how it was applied in practice. “Anything that allows food supplies to move faster is a good thing. However, the devil really is in the detail and in the administration of the scheme, if it will work,” he said.

But another industry insider who asked not to be named to preserve their relations with the government said ministers were underestimating the complexity of supply chains and the roles played by secondary subcontractors.

“This is just embarrassing, and won’t work. Another knee-jerk scheme, designed for a press release rather than a genuine plan for how to transition our food supply chain,” the person said.

Defra did not immediately respond to a request for comment.

Socceroos coach Graham Arnold concerned about duo being on outer

What Is The Most Common Type Of Planet In The Universe?

Socceroos coach Graham Arnold concerned about duo being on outer

What Is The Most Common Type Of Planet In The Universe?

What we can expect from Biden’s inaugural address

Saw The ‘Christmas Star?’ How You Can See A Rare ‘Triple Conjunction’ Of Three Planets This Weekend

What Is The Brightest Star In The Night Sky? Here’s Where You Can See It At Its Best This Week