Bukola Samuel-Wemimo, a journalist who works with Television Continental (TVC) in Lagos has accused the Department of State Services (DSS) of unlawfully detaining her.

The anchor of Fireworks (a political programme on TVC) accused the secret police of not liking outspoken outspoken Nigerians also revealed that she was detained because her driver unintentionally crossed while DSS operatives were trying to stop traffic which built up to their office from the center for management and development.

She explained that while it is good that the secret police are securing their area, they are causing more harms to drivers.

Read her tweets below…..

I am being detained unlawfully here by the @StateDeptDSS on CMD road Magodo for doing no wrong. It is the practice of the DSS to stop traffic when it builds up to their office from the center for management and development. My driver crossed unknowingly, we explained to them

That it was unintended.I even told them that it happened to me before when I drove myself and I parked immediately apologizing. But obviously they don’t like outspoken Nigerians. By stopping traffic in front of their office beside cmd road, @StateDeptDSS  contributes to the Gridlock.

If the intention is to secure their area, it is good, but the collective safety of drivers is also important. The first DSS official had actually let us go, but another farther off who wants to prove tough has detained us. I will not be intimidated.

Samuel-Wemimo announced that she was released shortly after she started tweeting.

As soon as I started tweeting the overzealous officials went into their office. They thought I would come begging. I refuse to be intimidated @dss_nigeria stopping traffic during gridlock in front of your office doesn’t make sense. Newcomers to the route will inevitably skip it.

And it is also not a safe approach to security. I have been released. I refuse to be intimidated.

Thank you everyone. I have been released. Happy new year! 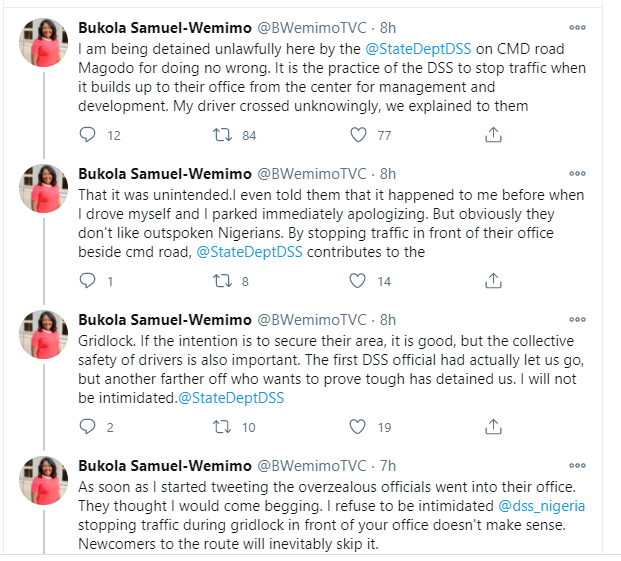 Tesla’s Cybertruck is on track for volume production in 2022

Lai Mohammed reveals how he relates with his Orderly

20+ Tailor Made Styles for Weekend Slay
27 mins ago

20+ Tailor Made Styles for Weekend Slay

Tesla’s Cybertruck is on track for volume production in 2022