Dressed in scrubs with a mask, visor and gloves and surrounded by security guards, a devastated 26-year-old viewed her father’s body today after Annastacia Palaszczuk refused to let her attend his funeral because of Queensland’s draconian border closures.

Sarah Caisip, who lives in Canberra, applied for an exemption last month to visit her sick father Bernard Prendergast in Brisbane – but it took 20 days to get approved and he died of liver cancer two days before her flight.

On Thursday, Ms Caisip, who is six days into her hotel quarantine stint in Brisbane, was banned from attending her father’s funeral because officials believe she is a Covid-19 risk even though the ACT has had no cases for 60 days.

Instead, she was granted a private viewing of her father’s body, surrounded by security guards and without being allowed to see her mother and 11-year-old sister.

The heart-breaking scenes came after Prime Minister Scott Morrison, who lost his own father in January, called Ms Palaszczuk and asked her to let Miss Caisip attend the funeral.

The Queensland premier refused and then bizarrely accused Mr Morrison of bullying and intimidating her. Ms Caisip said Ms Palaszczuk was ‘destroying my life’. 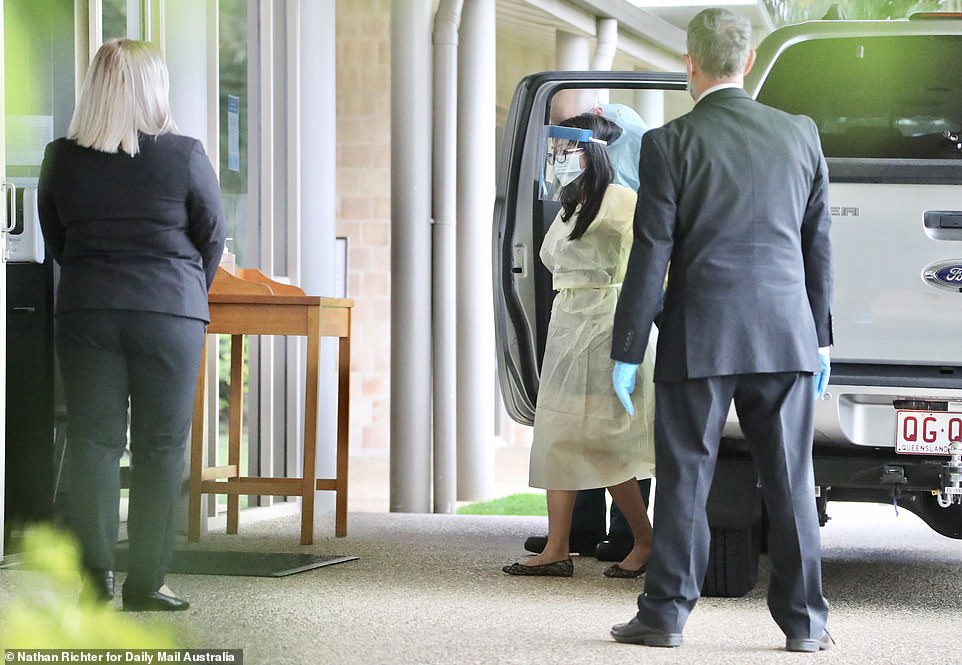 Sarah Caisip (in yellow) was allowed to have a private viewing of her father’s body, dressed in PPE gear and with security guards minding her. She was not allowed to greet her family 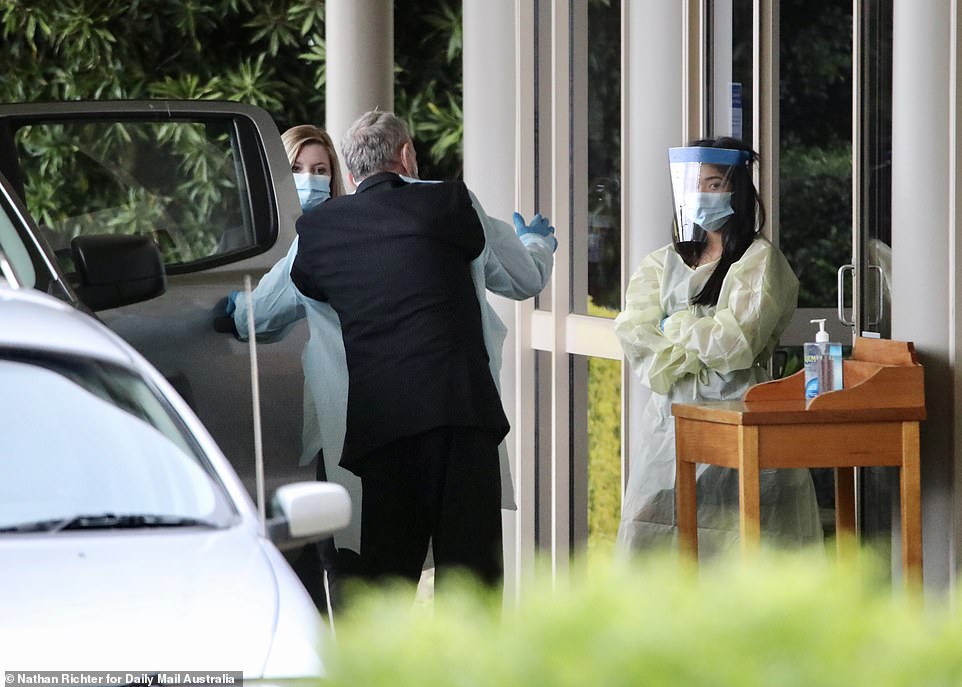 Distraught: The 26-year-old was devastated that Premier Palaszczuk denied her the chance to say goodbye to her father 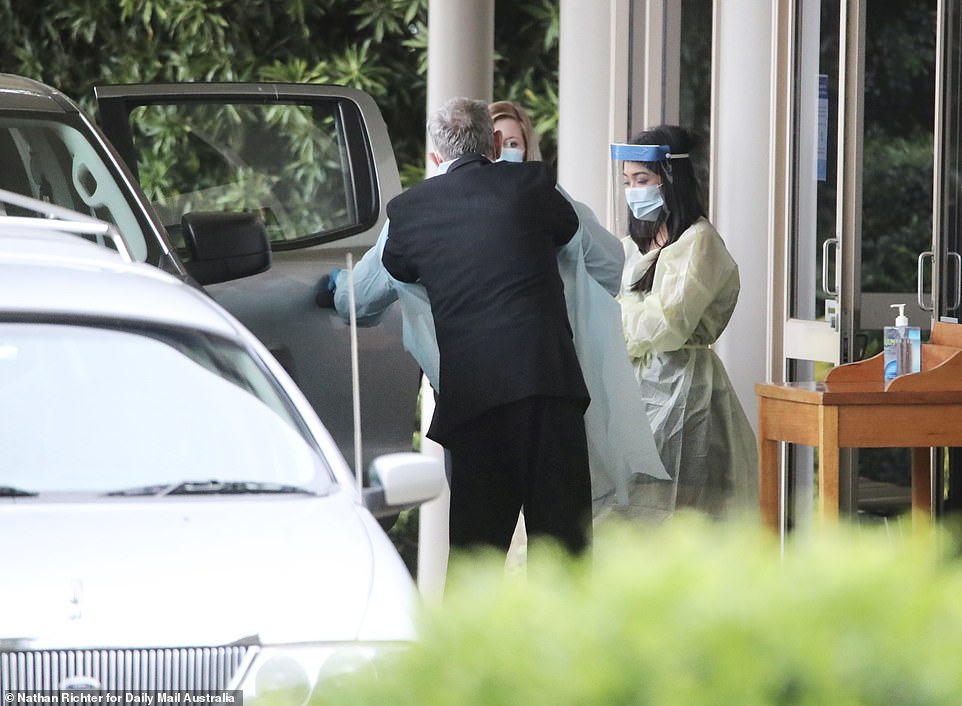 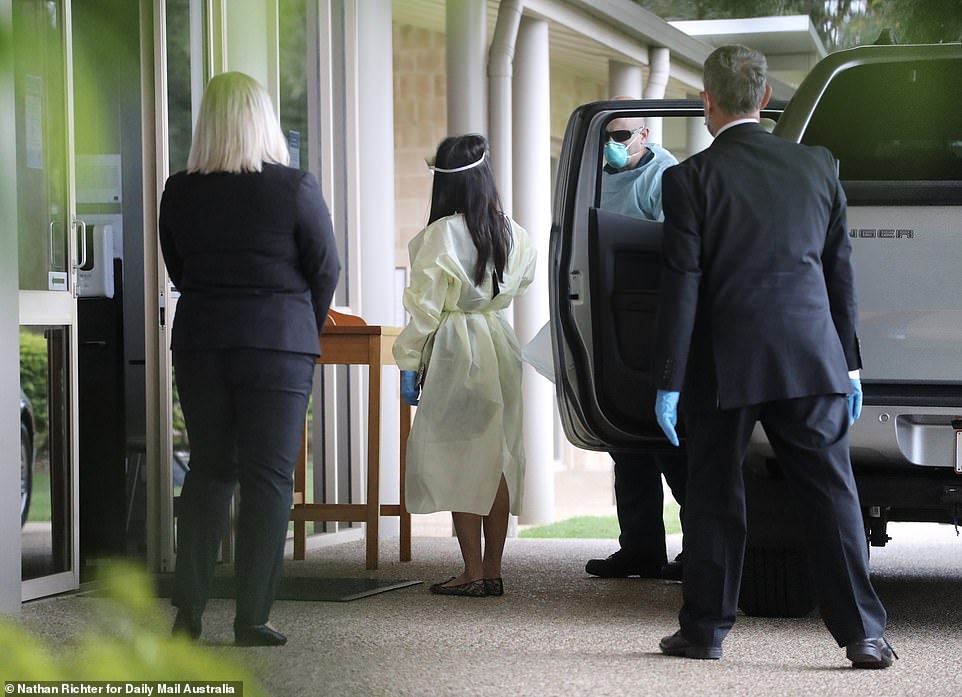 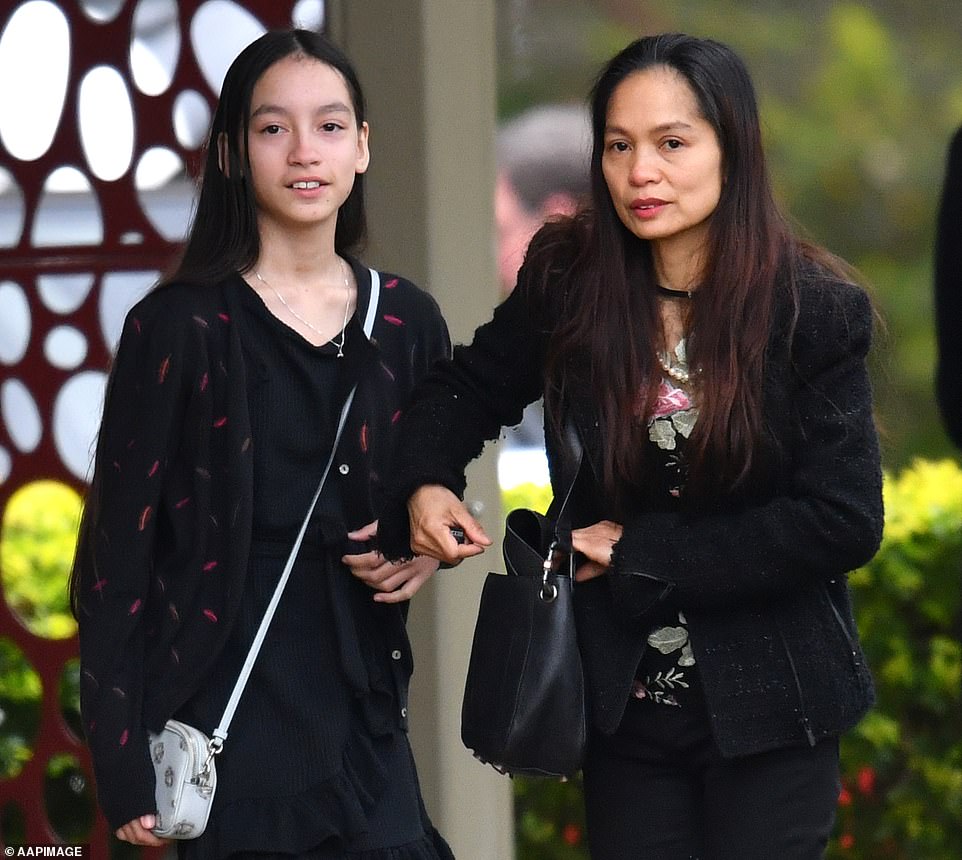 Miss Caisip was granted a private viewing of her father’s body, surrounded by security guards and without being allowed to see her mother and 11-year-old sister (both pictured) 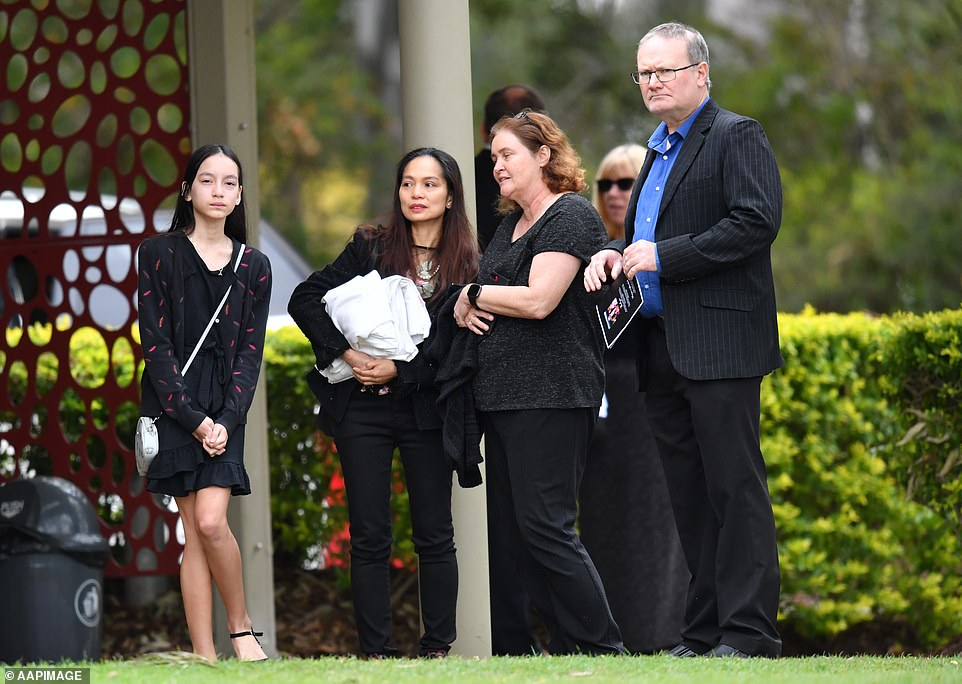 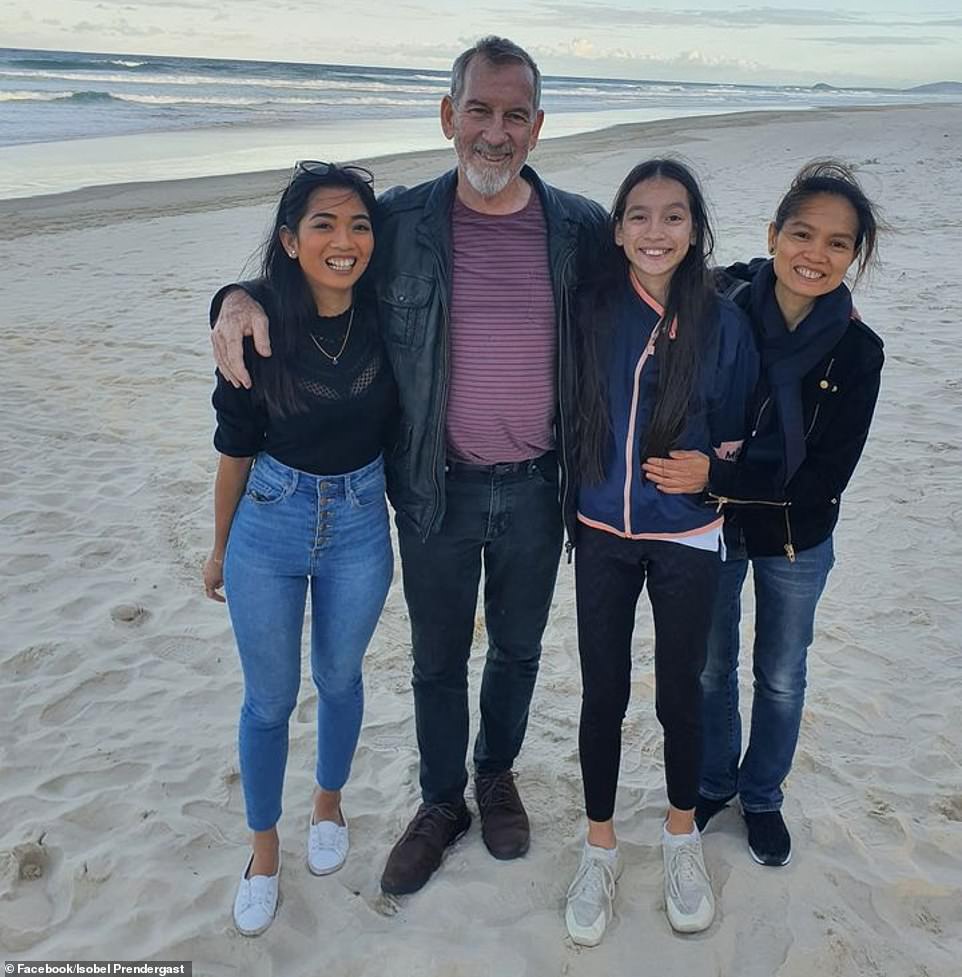 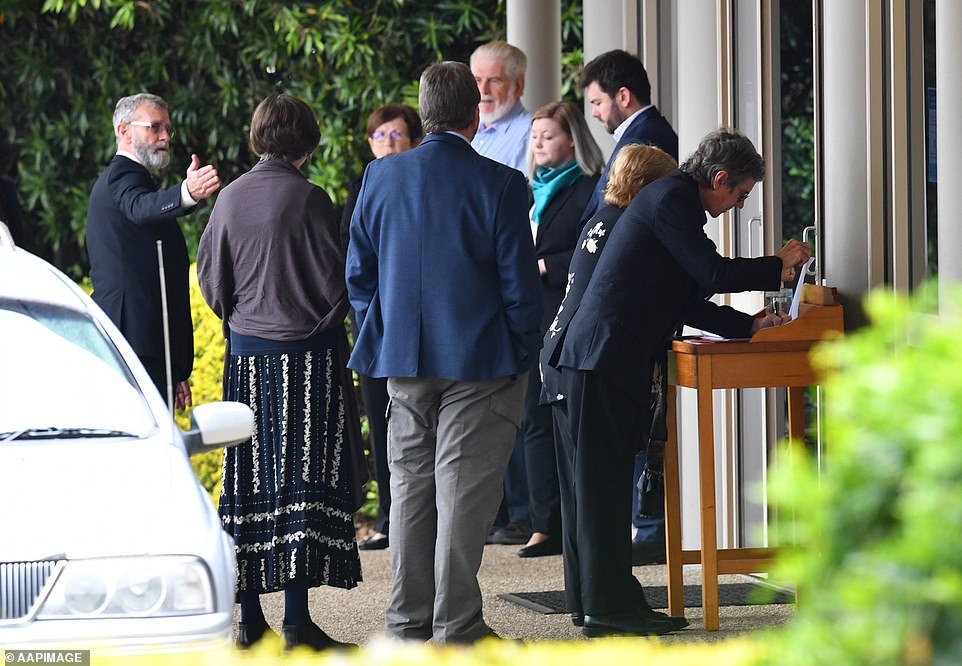 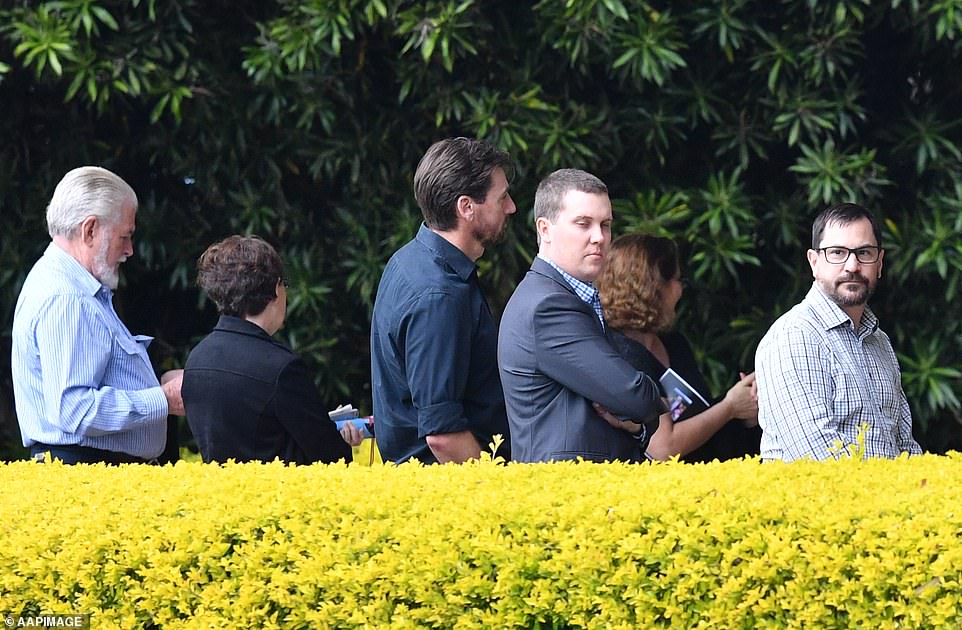 The funeral went ahead on Thursday afternoon without Ms Caisip in attendance, leaving her 11-year-old sister to face the tough day without her older sibling. Pictured: Mourners arriving 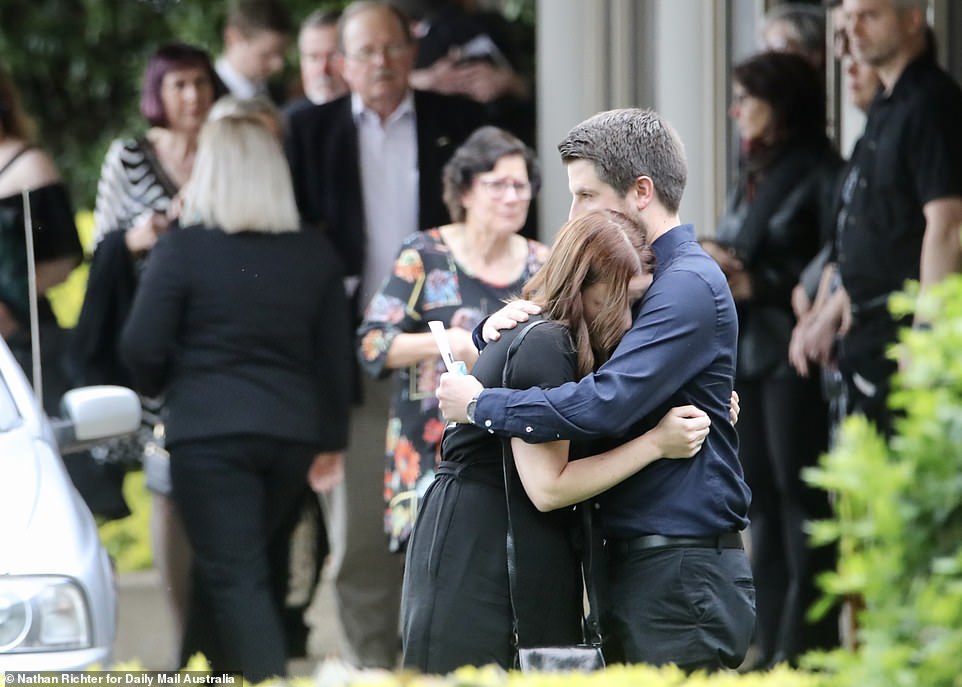 Queensland’s borders are closed to Victoria, New South Wales and the ACT.

Premier Palaszczuk faces an election next month and the tough borders are popular with most Queenslanders.

The funeral went ahead on Thursday afternoon without Miss Caisip whose 11-year-old sister faced the tough day without her older sibling.

‘The last thing I would want to happen, is to have an outbreak at a funeral.’

Dr Young said Miss Caisip’s application for an exemption took 20 days because there are thousands of applications submitted every day.

She said Canberra is declared a hotspot because ‘it is in the middle of New South Wales, we know there are cases around them.’

In a radio interview with broadcaster Ray Hadley on Thursday morning, an emotional Mr Morrison said he asked the premier to show some compassion and let Miss Caisip go to the funeral.

‘The only thing that matters today is that Sarah can be with her family to mourn the passing of her father Bernard.

‘This is a heartbreaking case.’

Mr Morrison said he appealed to the premier to change her mind.

‘Surely in the midst of all of this heartache, and everything that everyone is going through, surely just this once it can be done,’ he said.

‘I just hope they change their mind and let Sarah go to the funeral.’

Mr Morrison, whose father died in January, seemed close to tears when he spoke about his own experience of loss.

‘Sadly she wasn’t able to see her father before he passed. All of us who have been through that process know how important that is. It’s still fresh in my mind,’ he said.

‘It was Father’s Day on the weekend and I’m just thinking if Sarah had to go through that day in a hotel in isolation and there she is today.’

Queensland Opposition leader Deb Frecklington had been campaigning to let Miss Caispin go the the funeral.

She said on Thursday:  ‘I’m absolutely disgusted that the Annastacia Palaszczuk and the Labor government has denied this young woman an exemption. This story is really hard to listen to.’ 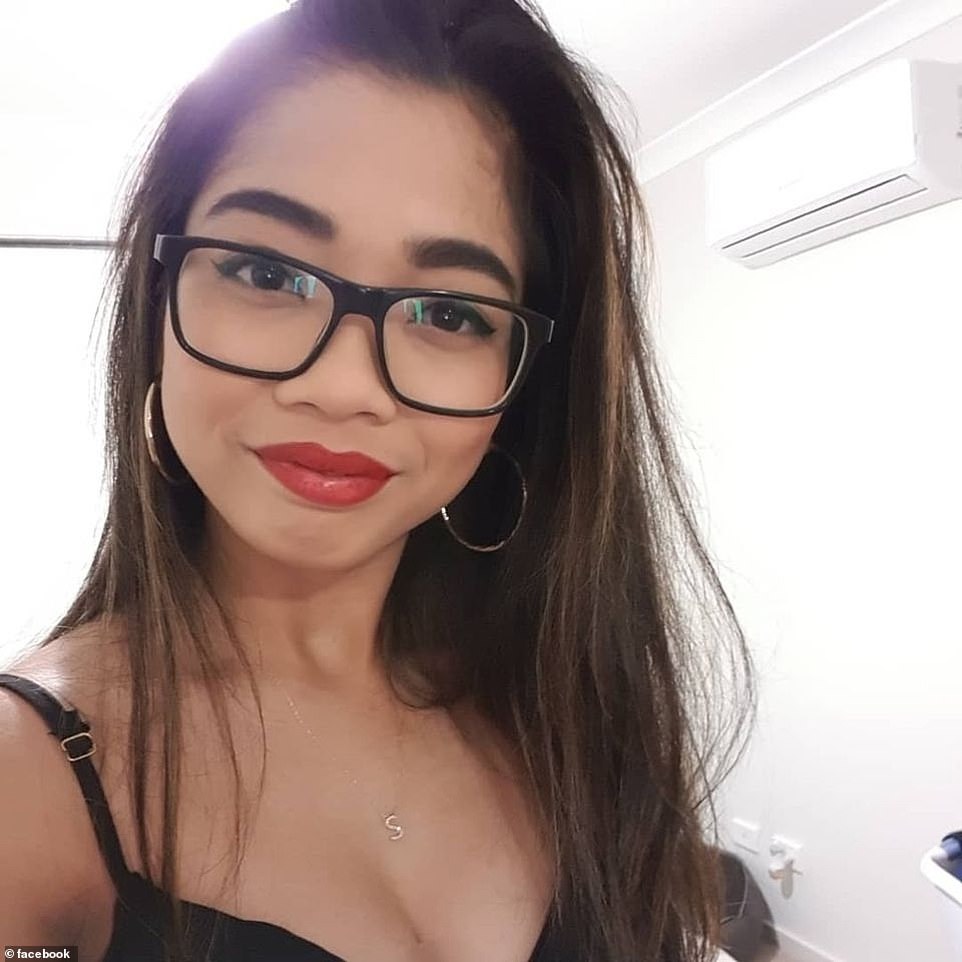 Sarah Caisip (pictured), who lives in Canberra, is in hotel quarantine in Brisbane after getting an exemption to enter Queensland to visit her father who was dying of cancer 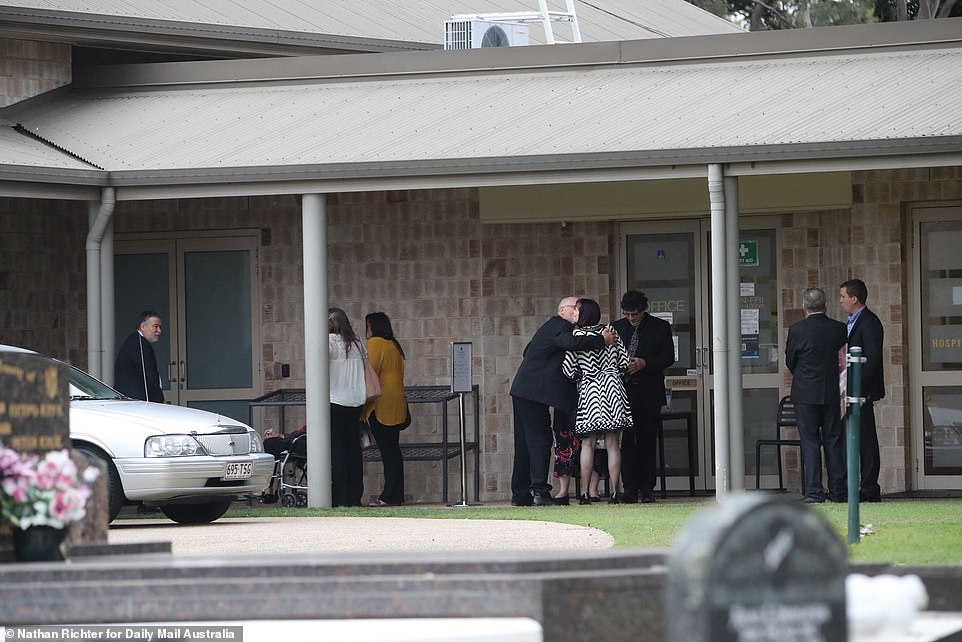 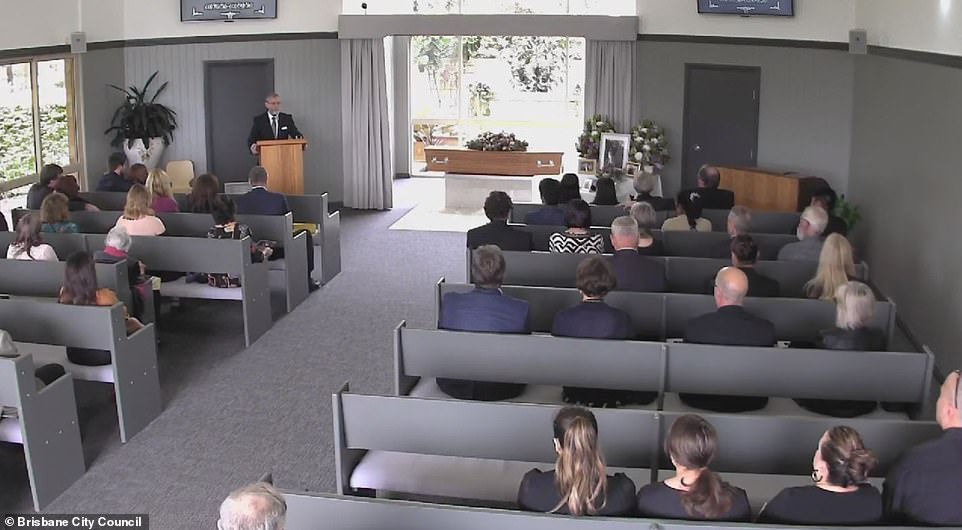 Miss Caisip wrote a furious letter to the Queensland premier accusing her of ruining her life. Pictured: The funeral 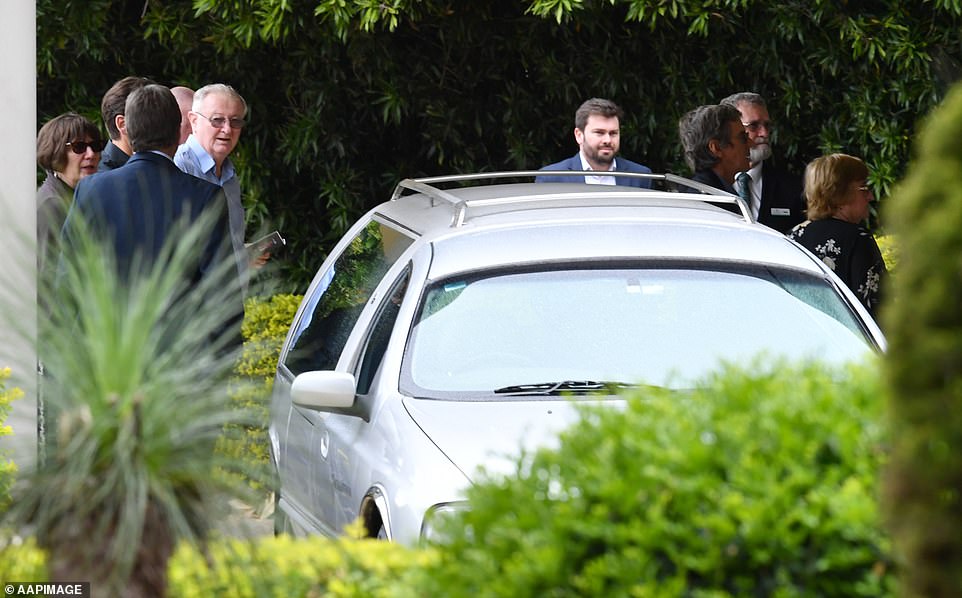 Earlier, the prime minister said: ‘I have done all I can.

‘There have been discussions with our chief medical officer and raising that with them and their health ministers.’

Victoria: Completely open, but other states are banning residents from going there

NSW: Border with Victoria is closed but others are open without restriction

Queensland: Open to everywhere but Victoria, NSW, and the ACT

Northern Territory: Open to everywhere but Victoria and Sydney, which must do hotel quarantine

Tasmania: Closed to Victoria, everywhere else must do hotel quarantine

Western Australia: Closed to everywhere without an exemption

Mr Morrison said he has ‘these types of conversations with premiers on a range of issues all the time’.

‘I don’t seek to make them public but I rang the premier this morning and I hope she will reconsider,’ he said.

In the Queensland parliament on Thursday, Ms Palaszczuk accused the prime minister of ‘bullying’ her.

She said: ‘I won’t be bullied nor will I be intimidated by the prime minister of this country who contacted me this morning, and who I made very clear to the fact, that this is not my decision.

Mr Morrison strongly rejected any accusation of bullying and said he just wanted Miss Caisip with be reunited with her sister and mother.

The prime minister has also spoken to Miss Caisip to offer her support and encouragement.

The 26-year-old earlier told 4BC Radio that she had planned to visit her dad for a father’s day surprise but the exemption took 20 days to get approved.

‘By the time they got back to me for the approval, dad had already passed away,’ she said.

‘I asked for an exemption just for a couple of hours to go to the funeral, I wasn’t asking them to leave quarantine after that altogether.

‘They said I shouldn’t even be in Queensland because the exemption for me to come to Queensland was to say goodbye to my dying father, not to go to the funeral.’

Miss Caisip said she has spoken to six health officials and not one has shown her any empathy.

‘Each and every single one of them did not help me nor show any compassion with my situation. They all just sounded like a robot,’ she wrote on Facebook. 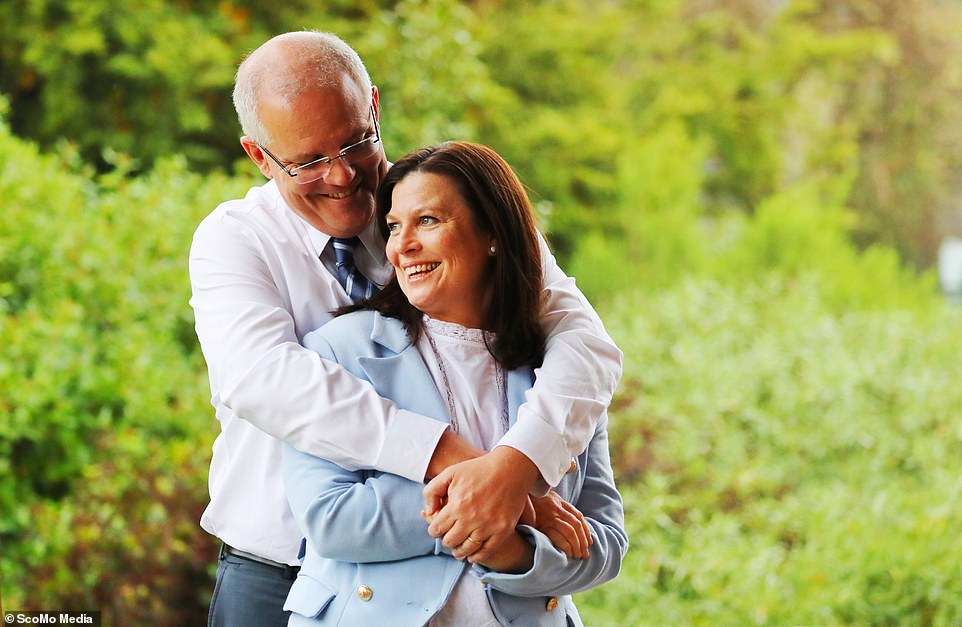 ‘Am I going to the viewing of the body and or the funeral? No because my exemption to attend either was declined by Qld Health.’

In an open letter to the Queensland premier, Miss Caisip wrote: ‘My dad is dead and you made me fight to see him, but it was too late and now you won’t let me go to his funeral or see my devastated 11-year-old sister.

Sarah Caisip’s letter to the premier

‘You won’t listen and your government is destroying my life.

‘I came from virus-free Canberra, so the fact that I’m even in quarantine is beyond belief but the fact that I am being denied my basic human rights to care for my grief-stricken mother and little 11-year-old sister enrages, disgusts and devastates me at the same time.

‘My little sister is now without my support and I will never forgive you’. 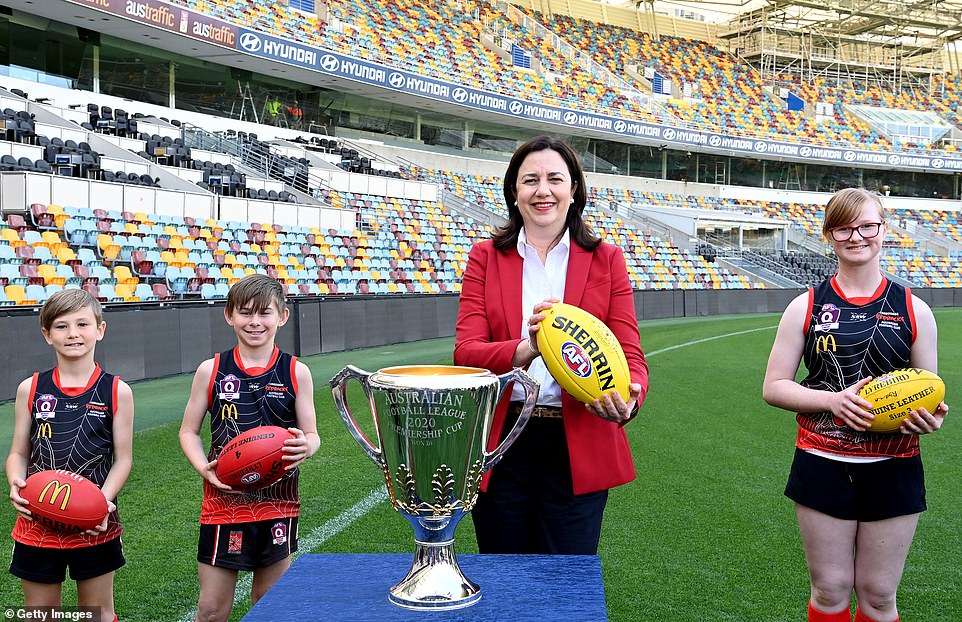 The Queensland premier has come under fire from federal treasurer Josh Frydenberg and other government MPs for keeping the border closed to parts of New South Wales and the ACT that have no community transmission of coronavirus.

Ms Palaszczuk has adopted nationalist rhetoric, pitting her state against the rest of Australia and even declaring that Queensland hospitals are ‘for our people’.

Ten days after that comment, a mother from Ballina, near the Queensland border, lost her unborn twin after she was flown 700km to Sydney for surgery because an exemption allowing her into Queensland took too long.

Then on Wednesday last week, the premier let hundreds of AFL players, WAGs and officials waltz into Queensland after clapping and wooping when Brisbane was handed the AFL grand final scheduled for 24 October.

Queensland grandmother Jayne Brown, 60, who was made to do hotel quarantine in in Brisbane following brain surgery, said the unfairness was ‘mind-blowing’.

The state’s chief health officer Jeanette Young has said a state would need to have 28 days with no community transmission before residents are allowed in to Queensland.

NSW Premier Gladys Berejiklian said: ‘I don’t know if we’ll ever get to that number. They’re putting on a pretty big ask during a pandemic.’

‘I think the Queensland Premier has got some questions to answer here,’ he told A Current Affair.

‘How can it be okay for people to go up to prepare for a footy game, and its not okay to go to hospital for treatment?’ 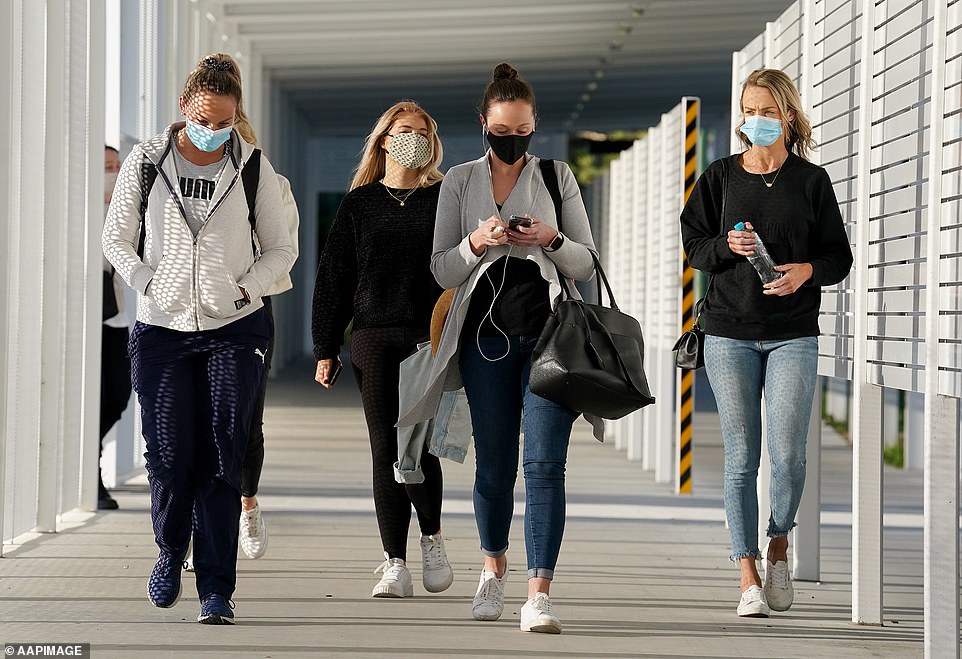 Passengers arrive on a charter-flight containing partners, wives and family members of AFL players at the Gold Coast Airport in July. Premier Annastacia Palaszczuk has been accused of ‘double standards’ for letting them in while keeping out border residents

Am I depriving my kid if I don’t get him an iPhone?

Sanwo-Olu promises to give cars to deserving teachers in Lagos