(RNS) — Brigham Young University, the flagship school for the Church of Jesus Christ of Latter-day Saints, issued a major report last week indicating that racism and a lack of diversity are problems on campus and that they may be getting worse instead of better.

Before I touch on the report’s main findings, I want to say this: kudos to BYU for initiating this internal study, and especially for making its findings public. Transparency is so important. As a private educational institution, BYU didn’t have to air its dirty laundry for all of us to see, but it has chosen to acknowledge that it has a serious diversity problem.

Unflinching honesty is the first step toward real change. But as the report makes clear, it’s only the beginning of what needs to be a major overhaul of longstanding policies and approaches at the university.

The gist of the report is that “many BIPOC (Black, indigenous and people of color) students at BYU feel isolated and unsafe as a result of their experiences with racism at BYU.” These students are underrepresented in the student body and have few role models in terms of faculty members or administrators of color.

Also, the problem is apparently worsening. For example, the report tracks BYU applicants and admits by race and finds that the rate of admission for white applicants has increased in recent years, while the rate for BIPOC students has declined.

The report draws on statistical data as well as more than 500 responses from people sharing their experiences. 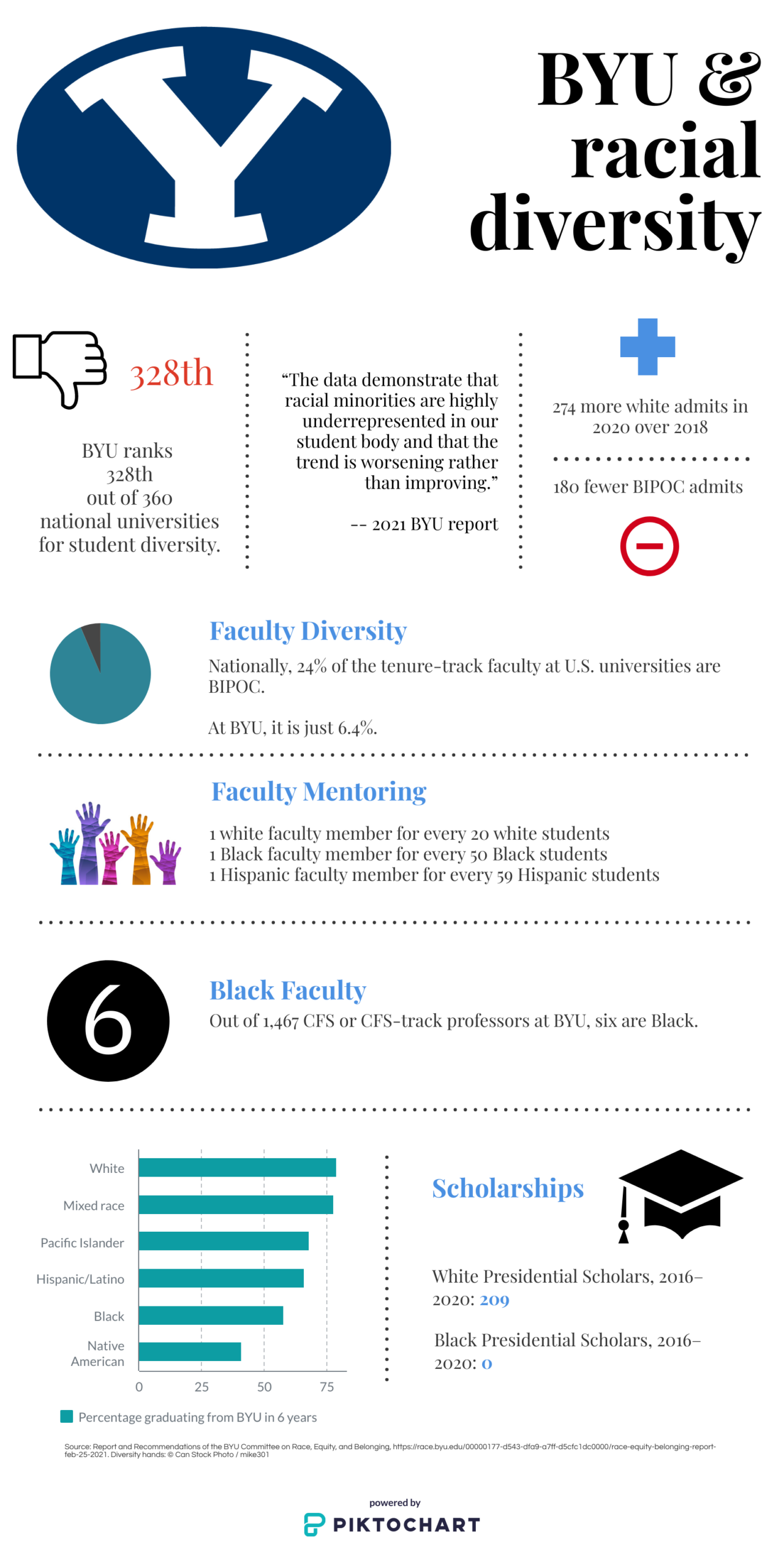 Some of the main findings include:

That’s just a sampling of what is in the report, which includes detailed suggestions of measures the university can take to address the problems of racism and lack of diversity. Louise Wheeler, an assistant professor of psychology at BYU, says she hears from students of color several times a week about their negative experiences and that their isolation and alarm are on the rise:

(BIPOC students feel) a lot of stress regarding the rise of alt-right movements (e.g., DezNat) within the university student body. This includes worries about physical safety and worries about things that might be said or done in classrooms, at church, etc. I have heard so much more about (these concerns) this year than in the past. This has led many of the students I have worked with to tell friends and siblings to not attend BYU.

The committee has suggested a number of improvements, which include more actively recruiting BIPOC students and faculty, bolstering support programs to help students graduate on time, requiring racial sensitivity training and mentoring potential future Ph.D. students. There is even a discussion of renaming certain BYU campus buildings; the Abraham Smoot building, for example, is named after a Utah slaveowner. (“Many BIPOC students, alumni, faculty, and community members have noted that the choice to honor someone in this way communicates a value they find hurtful, and they have urged BYU to review the choice,” the report says.)

Many eyes will be on BYU to see what changes it implements to address the problems described in the report.

40 years on, most Mormons still believe the racist priesthood/temple ban was God’s will

If a Dr. Seuss book offends us, why not pluck it out?

If a Dr. Seuss book offends us, why not pluck it out?