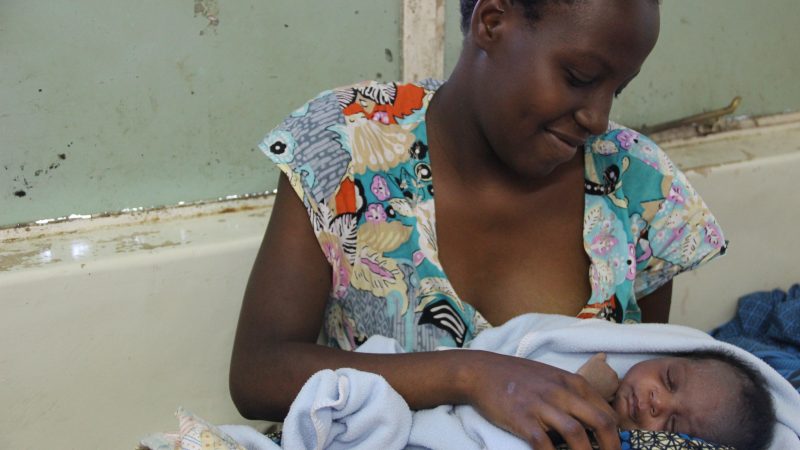 Mother Mphatso Gumulira, 15, with her son Zayitwa in the Queen Elizabeth hospital in Blantyre, Malawi. Photo via DFID/Flickr, CC BY 2.0.

Editor’s note: This story was written by Kondwani Magombo as part of the UK government-funded PROTECT project for ARTICLE 19 and is published here through a partnership-sharing agreement.

When Jazira Afiya, a 27-year-old mother of 3, voted in Malawi’s rerun presidential election in June, she cast her vote with one wish: that the incoming government would bring health services to where she lives.

Afiya lives in Kanyenga, a remote village in the country’s lakeshore and tourism district of Mangochi. The nearest public health facility is 40 kilometers away, so the easiest way to get there is by motorbike taxi, for a return fare of 6,000 Malawi kwacha (about $8.02 United States dollars) — a huge price for subsistence farmers like Afiya.

Residents of Kanyenga are all too familiar with the sick dying on the way to the hospital, or pregnant women giving birth during the journey and sometimes losing the baby in the process.

Afiya was one of those who went into labor and struggled to reach the hospital in time.

“I searched the village for a motorbike to hire, but I couldn’t find any,” she told ARTICLE 19. “At around 3 a.m. I gave birth to a baby boy right at home with the help of women from the neighborhood.

“The following morning, I managed to hire a motorbike and when I got to the hospital, I was told that the baby had caught severe pneumonia, apparently due to exposure to cold on the way; and just like that, I lost my baby,” Afiya explained to ARTICLE 19.

Access to health services is a struggle for the majority of Malawians and in particular, the 84 percent of the population who live in rural areas. At the center of Malawi’s vast gaps in health care provision are women and children who require specialists’ services such as ante-natal, maternity care and under-five care.

The UN and the World Health Organization are aiming for Universal Health Coverage by the year 2030.

Due to these problems, health services became a central campaign issue in recent elections. The new government of the Tonse Alliance was elected on a range of promises, including the delivery of essential health care in the country.

As Afiya and her neighbors wait for the new government to deliver on those promises, civil society organizations in the country are heeding the calls of the local community and calling for action.

“Through the National Advocacy Forum, we make our presentations to the government on issues that impinge on the rights of the people,” explains Emma Kaliya, a gender activist and executive director for Malawi Human Rights Resource Centre (MHRRC). “We have presented our manifesto to the president with regard to access to essential health care for women and children.”

Kaliya is calling upon the government to urgently introduce mobile clinics to access remote and hard to reach areas such as Kanyenga village.

“Issues around maternal and child health care must be a priority to help reduce mortality and morbidity rates, which are still very high,” says health care advocate and lobbyist, Dorothy Ngoma who, until 2018, was president for Malawi’s National Organization for Nurses and Midwives.

“I would like to say to the new government that both civil society and the people of Malawi are watching, and will not accept anything less,” she told ARTICLE 19.

The government says it will continue to work to resolve these issues, assessing the interventions and resources available to people, particularly those living in rural areas.

Dr. Charles Mwansambo from Malawi’s Ministry of Health told ARTICLE 19: “We have developed a plan which, among other things, prioritizes the construction of health facilities in remote and hard-to-reach areas in order to improve the access to essential health services for all Malawians. However, the resource envelope is limited and as such we can only construct at a slower pace than preferred. The Ministry is therefore also working on mobilizing more resources from local and international development partners so we can construct more facilities.”

Alongside the strain on health services during the pandemic, another major challenge has arisen: a surge in the number of child pregnancies and child marriages. Mangochi district recorded nearly 7,400 teen pregnancies from January to June in the year — an increase of more than 1,000 compared to the same period in 2019.

Ngoma fears possible complications ahead, as many may opt to have an abortion, which is legal in Malawi only in cases where the woman’s life is at risk.

“We must be ready to provide post-abortion services to pregnant girls, and we will need to support the parents whose daughters have been affected,” she said.

SACA DG Decried Stigmatization Of Persons Living With HIV, Debunks Myths That HIV Is A Scam