Land of Hope and Glory and Rule Britannia! were tonight sung by a choir at the Last Night of the Proms following furious backlash over lyrics being pulled due to ‘colonial ties.’

The BBC previously said the controversial pieces would be performed without lyrics at the Royal Albert Hall in London but made a dramatic U-turn following a heated debate over the decision.

A reduced orchestra of 65 rather than the usual 300 performed live at the venue – but without an audience due to coronavirus restrictions – with the singers placed in the stalls to ensure social distancing.

Violinist Nicola Benedetti stepped in to perform during The Lark Ascending by Vaughan Williams after Lisa Batiashvili pulled out due to illness. 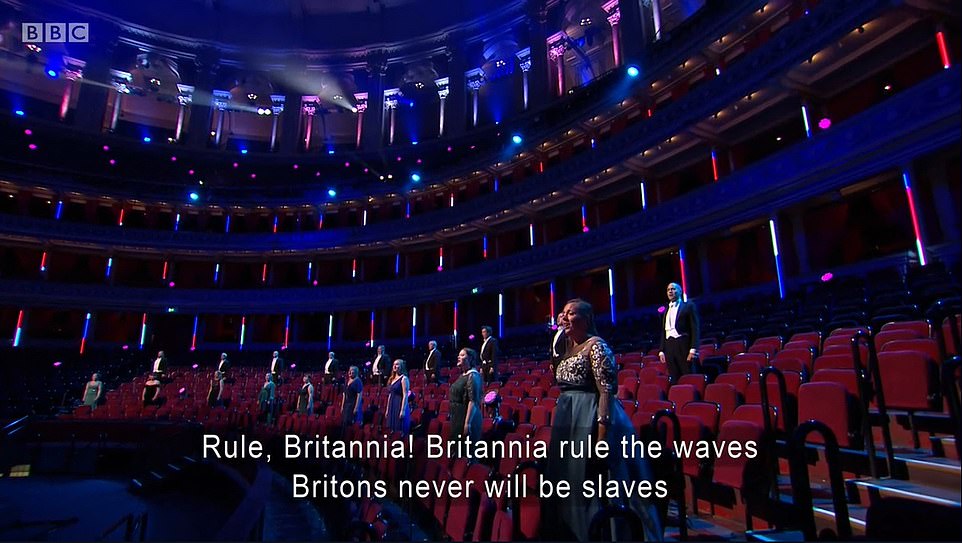 Land of Hope and Glory and Rule Britannia! were tonight sung by a choir at the Last Night of the Proms following furious backlash over lyrics being pulled due to ‘colonial ties’ 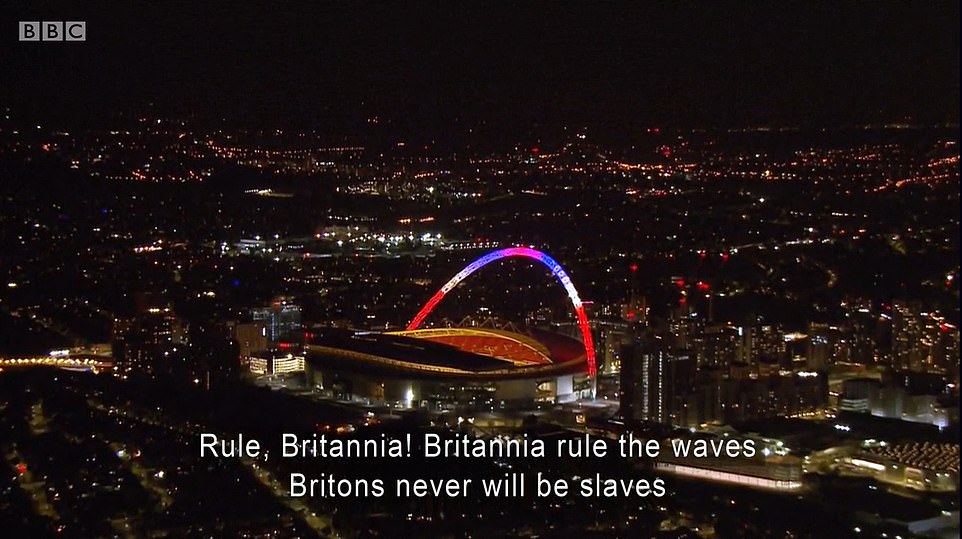 Introducing the show, host Katie Derham said: ‘Our orchestra, singers and some very special guests are standing by for an evening of classical treats, show songs and all your traditional favourites.’

The show was screened in the grounds of the Royal Hospital Chelsea to a socially distanced audience of hundreds.

The original plan would have seen the traditional pieces, seen by some as controversial because of their perceived ties to imperialism, performed without lyrics.

But a decision was made to include lyrics performed by a ‘select group of BBC singers’ after the MailOnline petitioned for the songs to be included.

Some of the lyrics deemed controversial in the songs include the Rule, Britannia! lines: ‘Britons never, never, never shall be slaves’, and: ‘The nations, not so blest as thee / Must, in their turns, to tyrants fall / While thou shalt flourish great and free: The dread and envy of them all.’

Ms Stasevska, the conductor, spoke out amid the controversy to say she played no role in the decision to strip the pieces of lyrics. 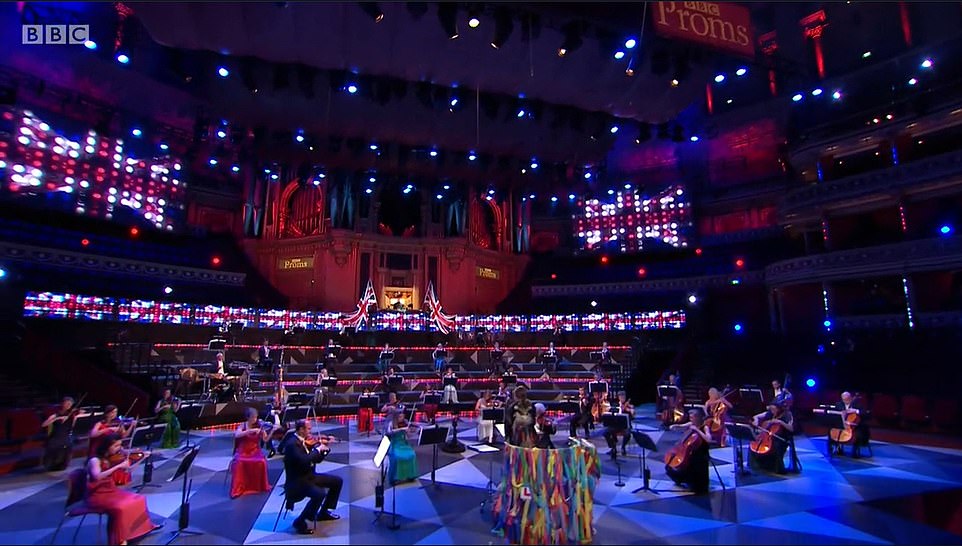 Musicians performed live at the venue, but without a live audience due to restrictions in place amid the coronavirus pandemic 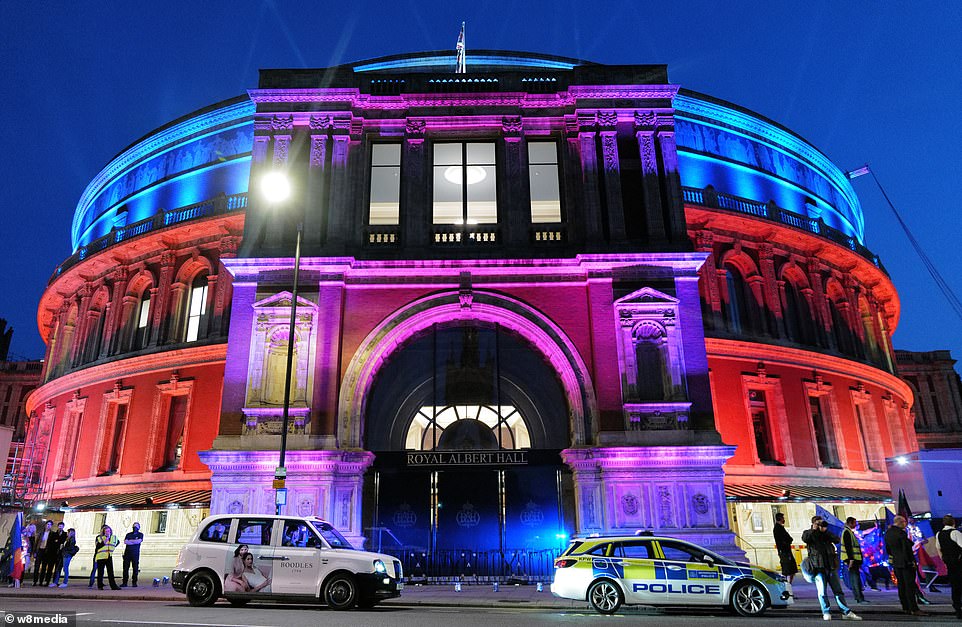 A reduced orchestra of 65 rather than the usual 300 performed live at the venue – but without an audience due to coronavirus restrictions – with the singers placed in the stalls to ensure social distancing. Pictured: The Royal Albert Hall tonight

The BBC Proms later said that ‘both pieces will now include a select group of BBC singers. This means the words will be sung in the hall, and as we have always made clear, audiences will be free to sing along at home.

‘While it can’t be a full choir, and we are unable to have audiences in the hall, we are doing everything possible to make it special and want a Last Night truly to remember,’ the broadcaster added.

‘We hope everyone will welcome this solution. We think the night itself will be a very special moment for the country – and one that is much needed after a difficult period for everyone.’

The BBC’s initial decision to play instrumental versions of the anthems prompted Prime Minister Boris Johnson to weigh in on the debate, insisting ‘it’s time we stopped out cringing embarrassment about our history.’

‘I cannot believe… that the BBC is saying that they will not sing the words of Land of Hope And Glory or Rule Britannia! as they traditionally do at the end of The Last Night of The Proms,’ he added.

‘I think it’s time we stopped our cringing embarrassment about our history, about our traditions, and about our culture, and we stopped this general bout of self-recrimination and wetness.’ 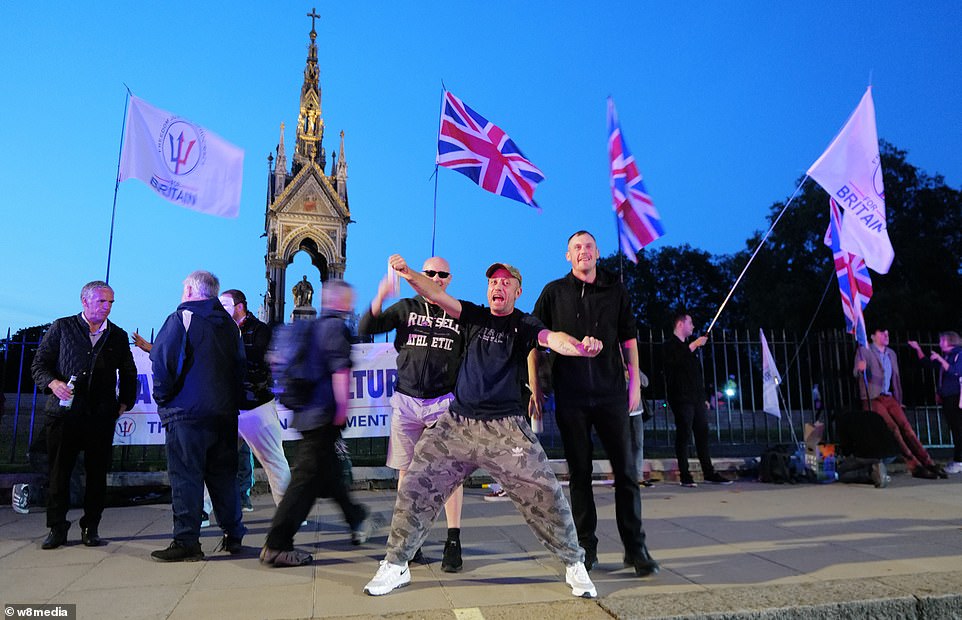 Pictured: Pro-EU and Brexiteers clash outside the Royal Albert Hall as the Last Night of the Proms got underway tonight 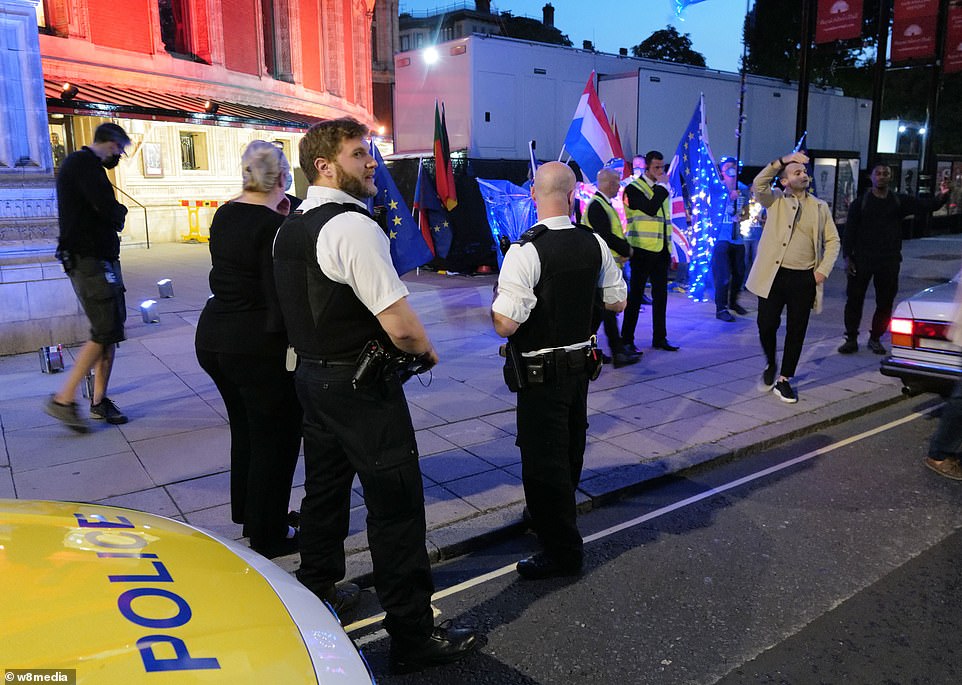 Pictured: Police are seen near the Royal Albert Hall as protesters and counter-protesters wave EU and UK flags in debate 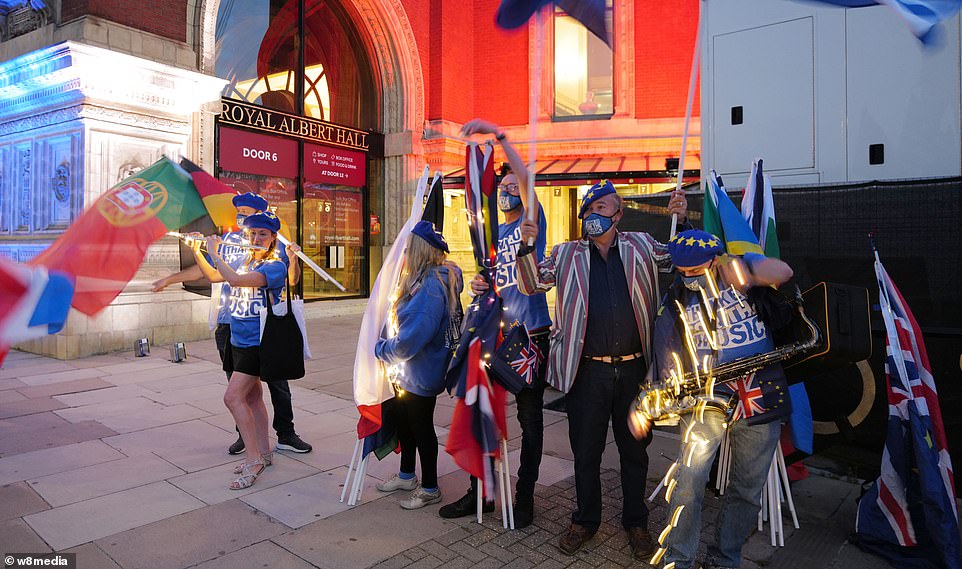 The original plan would have seen the traditional pieces, seen by some as controversial because of their perceived ties to imperialism, performed without lyrics. Pictured: Pro-EU supporters outside the Royal Albert Hall tonight

After the U-turn, Downing Street told the BBC the Prime Minister ‘welcomes the decision’ to include lyrics during the Last Night performances of the two anthems.

‘People love our traditions and our history with all its imperfections. It’s crazy for us to go around trying to censor it. It’s absolutely absurd and I think we should speak out loud and proud for the UK and our history.’

BBC insiders had also criticised the corporation’s initial decision to only include instrumental versions of Land of Hope and Glory and Rule Britannia following the furious racism row.

A source told The Times the BBC’s handling of the programme at times felt like ‘white guys in a panic’ trying to appease the Black Lives Matter movement because of the songs’ apparent links to colonialism and slavery.

Conservative MP Michael Fabricant added: ‘I think it’s all very sad, there are some lovely words in Rule Britannia, it’s not all about Britain not being slaves. You’ve got “other nations not so blessed as thee must in their turn to tyrants fall while thou shalt flourish great and free”. Isn’t that lovely?

‘It was written in 1740. What was happening then? There was the War of Austrian Succession in which Britain was involved but it was also a time when the British allowed nationality to Jews and Huguenots overseas, so Britain was a great Liberal, trading nation.

‘The National Anthem will be sung and Jerusalem will be sung so it seems like they are trying to pick out just these two songs. Confident, forward-looking nations do not erase their history, they add to it.

‘And Britain’s history is not all bad, we abolished slavery in 1807, more than 50 years before America got round to it, so that is something we could be proud. I can live with that [songs being sung by one person].

‘When you hear some of these opera singers belting it out I don’t think you’d say it’s a thin voice. Let’s just have one voice singing these songs loudly, why not? It’s a tradition and it’s a beautiful tune.’

Land of Hope and Glory and Rule Britannia are traditionally performed on the Last Night of the Proms, when thousands of flagwaving attendees normally pack the Royal Albert Hall.

However, critics argue that the lyrics to Rule Britannia, including the line ‘Britons never, never, never shall be slaves’, are overtly racist given the UK’s prominent role in the slave trade – and also the implication that some people could be slaves.

The 1902 lyrics of Land of Hope and Glory were reputedly inspired by Cecil Rhodes, an imperialist and mining magnate whose statue is being removed from an Oxford college following protests.