Another five people have died of coronavirus in hospital in England, bringing the total number of confirmed reported deaths in hospitals to 29,661, NHS England said on Sunday.

The patients were aged between 67 and 86 and all had known underlying health conditions.

A total of 244 people have also tested positive for coronavirus in Scotland in the past 24 hours – the highest daily figure since May 6.

The statistics show that 22,679 people have now tested positive in Scotland, up from 22,435 the day before. 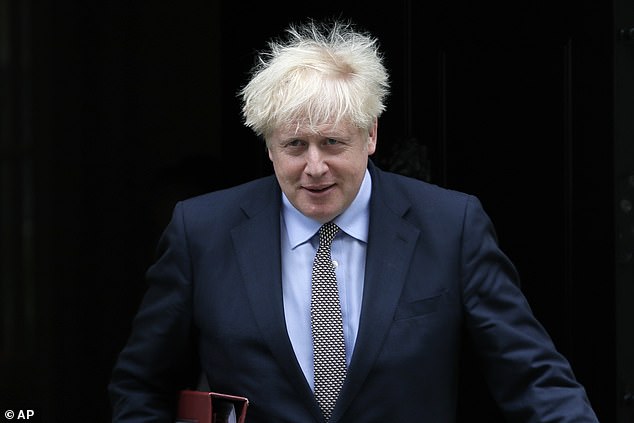 The Government is imposing panic restrictions across England, with Boris Johnson’s draconian new ‘rule of six’ due to kick into force on Monday

No deaths of confirmed Covid-19 patients have been recorded in the past 24 hours and the number of fatalities remains at 2,499.

There are 259 people in hospital confirmed to have the virus, down by two in 24 hours.

Of these patients, seven were in intensive care, down one.

There have been a further 162 cases of Covid-19 in Wales, bringing the total number of confirmed cases in the country to 19,390.

Public Health Wales said no further deaths had been reported, with the total number of deaths since the beginning of the pandemic remaining at 1,597.

It comes after Britain recorded 3,497 new cases of coronavirus yesterday, marking the highest Saturday rise since May, as SAGE warns that England is now on the brink of ‘losing control’ of the virus.

Professor Sir Mark Walport warned the public that England is on the brink of ‘losing control’ of the viral outbreak as he urged people to cut off contact with friends and family.

The Government is imposing panic restrictions across England, with Boris Johnson’s draconian new ‘rule of six’ due to kick into force on Monday amid fears the reproduction ‘R’ rate could be as high as 1.7.

As the reproduction rate rises the number of people one infected person could pass the virus onto increases dramatically – putting the country at risk of a second wave of illness.

Ministers are considering a 10pm curfew for pubs next week with Justice Secretary Robert Buckland warning that young people are ‘forgetting the rules’ ahead of the new limits on gatherings coming into force on Monday.

Ahead of the crackdown, Mr Buckland has warned the government could go even further next week and introduce curfews. 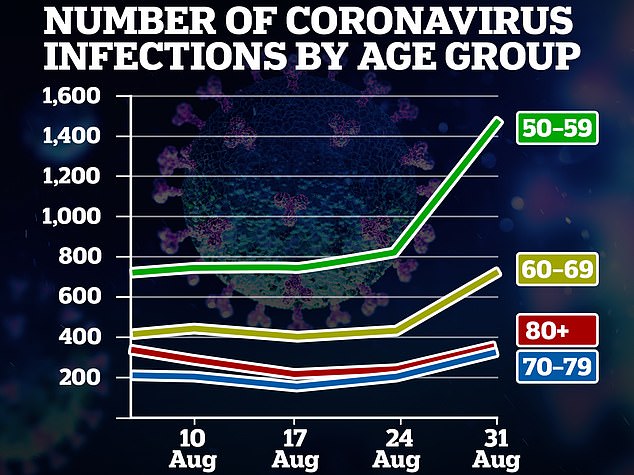 PHE data suggests that Covid-19 cases are surging among the over-50s, as senior officials last night warned of ‘worrying’ signs for high-risk groups

He told Sky’s Sophy Ridge On Sunday: ‘I think that as you’ve seen we’ve been very prepared to move quickly where necessary and where the evidence points us.

‘I think there’s an issue about social occasions and social events and particularly young people getting together and enjoying themselves sometimes a bit too much and forgetting the importance of the rules.

‘I think it would be idle of me to speculate as to what measures we might have to bring in as we approach the winter.’

Prime Minister Boris Johnson is believed to be considering introducing a 10pm or 11pm curfew on restaurants, bars and pubs if local measures are unable to bring the spread of the virus under control.

Speaking about the rise in cases, Peter Openshaw, professor of experimental medicine, Imperial College London, said a ‘trickle’ of cases can turn into a ‘cascade’, adding that if people do not abide by the ‘rule of six’ now then the country faces going back into ‘hard lockdown’.

He said: ‘I think everyone is in agreement that we really need to act very quickly now in order to prevent this from growing exponentially.

‘I think that’s the main point is that we must act fast because it’s so much harder to get this sort of thing under control if you delay.

‘Even a few days is potentially going to be quite dangerous now at this particular moment.’

Meanwhile, up to 4.5 million people most at risk from Covid will be told to stay at home under a new shielding plan based on health, age and weight, according to a report.

Letters with tailored advice are to be sent to individuals based on a new ‘risk model’ which will factor in underlying health conditions, age, sex and weight.

This measure will be introduced first for areas with high rates of infection but a Whitehall source told The Sunday Telegraph ‘if the rate is so concerning across the whole of England we are prepared to do it on a blanket basis.’

Get £250 cashback on the Note 20 at Carphone Warehouse

F1 Tuscan Grand Prix practice LIVE: Follow all the very latest ahead of the big race on Sunday

Victoria’s State of Emergency and State of Disaster extended again